Posted on November 8, 2017 Categories: Events, News Comments are off for this post 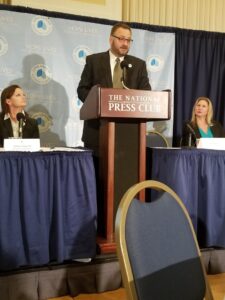 I have spent the last several days attending activities for Lung Cancer Awareness Month in Washington, DC. On Wednesday, November 1st, the Lung Cancer Action Network (LungCAN) hosted a press conference for the second year at the National Press Club consisting of two panels of experts. There were two panels of researchers and advocates describing their latest developments and activities.

CanSAR President Kyle Hoylman first spoke about how radon has affected his family. He then educated the attendees on radon basics, described our push to pass Liz’s Law–A Radon Awareness Act–in as many states as possible, and introduced our newest campaign, Women Against Radon (WAR). Other advocates shared their stories as well. Several research organizations told of their latest developments in the lung cancer arena.

November 2nd brought us to Capitol Hill and the Life & Breath Rally. The purpose of this rally–the first of its kind–was to encourage lawmakers to dedicate more money to lung cancer research. Rep. Rick Nolan (D-MN) introduced the crowd of around 150 to his daughter Katherine, who was diagnosed with Stage IV lung cancer three years ago. His personal experience led him to create the Lung Cancer Caucus (LCC). Other members of the LCC addressed the crowd as well. Ex-NFL player Chris Draft also fired up the attendees with his experience with lung cancer. His young, healthy, non-smoking wife lost her battle to lung cancer in 2011, just one month after they got married. This led him to start The Chris Draft Family Foundation. 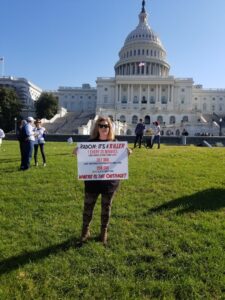 The rally concluded with attendees laying 433 flags with names of lung cancer victims on the Capitol grounds. They represented the 433 Americans who die from lung cancer every single day. As the flags were laid, names of 433 lung cancer victims were read. Then we all laid down on the ground for 30 seconds for a Die-In, a very poignant reminder of those who have lost their battle with this dreaded disease.

Even though the rally was to plead for more funding for lung cancer research, our radon awareness message was heard. I was on the front row with my sign so that every single speaker could see and remember.

As this was the first year of the Life & Breath Rally, we did not have the 433 attendees that we had hoped. I am confident that next year there will be more attendees. Will you be one of them? I know I will!